The Briefcase of Wonders

I am the sort of man who walks around with a briefcase. I also wax my mustache and wear a fedora, but that's the subject for another time. While there are many and varied uses for a briefcase, the one I'm going through right now it it's ability to work as a mobile repository of games. I've been making an effort to carry as many games as I possibly can around in that thing, so as to be prepared for whatever the situation might dictate. Let's take a look, shall we? 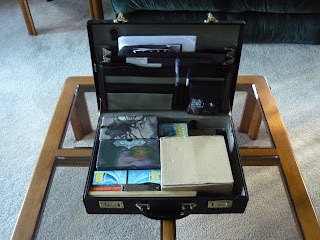 That's the briefcase in it's packed form. In the bottom is a visible bit of wood, that's a cribbage board. Directly up from it are two decks of standard playing cards. Above those decks are two blue deck boxes which contain a prototype for the Presidential Rumble, one of the Awesome Games we're designing. Then are the two be-artted mid sized boxes. They originally came from Magic the Gathering fat packs, for Shadowmoor and Eventide. Now I'm using them as conveniently sized discrete storing units. The one contains a set of dime store poker chips and a complete chess set, the other contains a couple Magic decks.

"Which magic decks" is an interesting question. Assuming I'm going to be using this briefcase amongst an unknown audience I don't want to bring too many. I can (and have) filled the entire space with decks of various kinds before. The main thing though, consonant with the purposes of the briefcase at large, is to provide myself options for any sort of pick up magic game I might run into. Currently the box contains an Elder Dragon Highlander deck (Sedris, the Traitor king as general), my standard Goblins deck, my extended five color reveillark deck, and two simple starter decks, which are designed as a way to teach the game to anyone willing to learn. Naturally, that's not nearly enough. I'd like also to bring along a low power silly casual deck (for environments where tournament decks are less welcome) and at least a draft set of sealed packs.\

Moving on, to the right you see another blue Dragon Shield deck box. They make good good card sleeves. We use them all the time for proxying up cards for our games. If you take the sleeves, put a bulk common magic card in them, you can slip a piece of paper in front of said card and make a game card, which can be shuffled over and over again without suffering wear and tear. In this case though, I believe that box in particular holds a magic deck, Zombies.

The large brown box also holds a number of magic decks, but this one is mostly a place holder. I'm looking to fill that space with more diverse games, although I'm not sure what goes in there. More on that later. Hard to see in the picture, but underneath that box you'll find a notebook where I keep permanent notes, a notepad where I dash off scores for games, and a chess/checkers board.

The pouch on the lid of the briefcase contains a wealth of dice; 25 six sided dice, four twenty sided dice (two of which are the spindowns from those fat packs) various D4s, D8s, and D10s, but oddly enough no D12s. There are a couple pens, and a couple documents stashed there, some boards from various games we're making and the occasional rules printout.

Again with the picture, only all laid out: 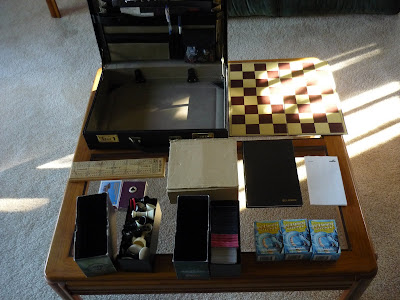 So here comes my next question: what else do I try to fit into my briefcase? I already pointed out the brown box can probably go, seeing as I only really need so many magic decks (All of them!). The problem is I've got to fit it that same size space. I've been considering fitting a RISK set in there too, since the cards and the armies wouldn't take up much space, but I'm not sure I can manage another board; the thing can be tricky to close as it is. On the other hand, there isn't much else I can think of to stick in that last area. Well, there are plenty of things, just they aren't games.

One other thing, I can fit an entire role playing session in there real easy. I've got a couple GURPS books on the thumb drive in my keychain, so all I need are a couple peripherals and a premade, one session adventure. I've been drawing up character sheets, maybe I'll post them one of these days.
Posted by Havoc Jack at 12:45 PM