That's the day the aliens will invade. Mark your calendars, it'll be here before you realize.

I chose this date in particular not just because it's a conveniently far flung future date, but also because the stars are in alignment. Specifically, if you go to an online orrey and put in the date, the planets will be in position. 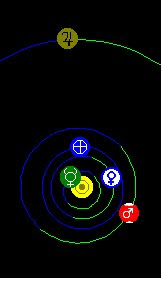 The game has an expected real world time of about a year. That is, I intend to update the game in real time and the positions of the planets in real time once a week for a year when we actually play the game. That means the board will change dynamically each update. Over the course of a year mercury will go around twice, Venus once and a half, Earth will return to it's starting place (...ok, that one's obvious), and Mars will end up about opposite where it is now. Jupiter will shift slightly.

But that's just the planets. There are a whole bunch of other things out there. Earth has a moon, Mars has two, Jupiter has several, bordering on many. But the handy thing about moons is that they'll tend to follow the planets along. There's a wide belt of orbital facilities around Earth, which also follow along. I expect there will be scattered habitation modules that won't be following anything, but I think those are fine to leave off for now.

The real question is "where do I put the asteroids?" If I go to NASA's planetary fact sheet it gives me some basic orbital parameters. If I check on that orrey I linked earlier it'll let me plot asteroids, but only if I do it in the correct format, for which they've helpfully declined to state the names of their variables. While I'm sure I could find another resource on the internet that will let me plot the proper positions of the larger asteroids, I'm equally sure it'll be a long and arduous task.

So I'm going to fake it. The width of the board is about the diameter of Mars' orbit. The asteroids spend approximately 1/4th of their time in that section. Rolling an eight sided die to figure out where to put them, we get Ceres and Pallas in our zone of interest. They both have an orbital peroid of about 4.6 years, which means they'll go about a quarter circle around the sun in our game time. Pallas starts towards the left and will be rotating out, while Ceres starts off the board on the right and will rotate in sometime in the game.

There are a couple other things on the board, but by and large we've got the layout down. Next we'll do some work on the economy.
Posted by Havoc Jack at 1:04 PM

Labels: The Terrible Secret of Space